Video (voice is in Russian, with English subtitles)

What is Free Oberon?

Free Oberon is a cross-platform integrated development environment for development in Oberon programming language, made in the classical pseudo-graphic style.

Compilation is done using the Ofront+ Oberon translator, the compiled console programs are executed independently or in the built-in cross-platform terminal emulator. Free Oberon uses the latest revision of the Oberon programing language (Oberon-07). The size of type CHAR is 2 bytes and it supports Unicode. The base modules were rewritten with this in mind: In, Out, Files, Texts, etc. The language extensions include pointers to arrays.

The IDE includes a cross-platform module Graph for graphics programming. It is built on top of Allegro5 library.

The interface of the IDE as well as the compiler error messages are translated in other languages. Anyone can add a language by editing a text file.

Free Oberon is free software and is shipped under GNU General Public License version 3 with source code. It can be compiled under Windows, GNU/Linux and other operating systems. Windows version contains a precompiled VOC compiler, and truncated MinGW bundle, necessary for its operation. The compiled programs are “native” Windows applications and do not require additional DLL files to work.

Free Oberon is part of a larger project, which includes writing a series of textbooks on programming, creating educational materials, and the development of a native Oberon compiler and other programs with the aim of developing informatics as science and popularizing it as science among programmers and students. 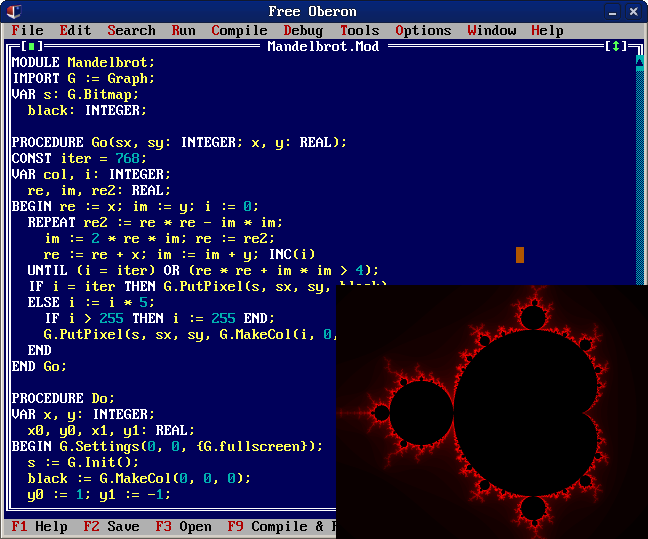 Game of Life with colors made in Free Oberon

The source code of the user programs are stored in the Programs directory, and the executable files are stored in the bin directory. To compile, a script file is used: data\bin\compile.bat (on Linux: data/bin/compile.sh), which you can edit if you like.

Please read the documentation to get used to the interface of Free Oberon more quickly. The editor can be switched to windowed mode, using the combination of keys [Alt+Enter], copy and paste can be done using [Ctrl+C] and [Ctrl+V]. The program trapped in a livelock can be stopped by pressing the [Ctrl+Break] key combination. Among others, the following modules are available: In, Out, Strings, Files, Math, Graph.

Please write your questions and wishes to freeoberon@yandex.com